By Narooma Charters Fishing No Comments

Check out these awesome catches on a recent trip off Montague Island. Caught onboard our vessel Sea Eagle, all fish caught are measured to ensure they are the legal size. Our customers were overjoyed with nearly 5o legal fish caught during the session.

Included in the mix are Leatherjacket, Snapper, Flathead and Nannygais (the smaller orange fish – no size limited on these).

Enjoy a fishing charter with your family and friends. We offer a range of packages to suit all levels of experience – click here for more info. 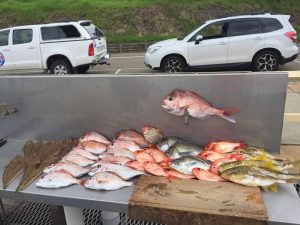 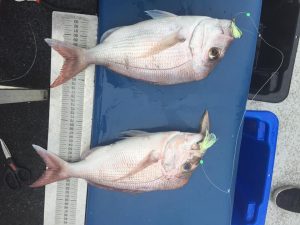 By Narooma Charters Fishing No Comments

The best fishing off Narooma

On the far South Coast of NSW, Narooma offers fantastic fishing for family and serious enthusiast.

Whether you’re in Wagonga Inlet, one of the many lakes in the region, wharves or beaches there is plenty on offer. Of course, the most serious fishing happens offshore!  In fact, the waters of Narooma contain some of the best game fishing found anywhere in the world.

Narooma Charters can take you on a fishing charter trip, whether it’s for a bit of fun casual fishing for the family or some more serious game fishing in deeper waters.

Narooma is the closest port to Montague Island, a well known fishing hot-spot. It only takes around 20 minutes to get out there, and have a line in to experience the action. While it cools off a little in winter, you’ll soon realise the fish don’t hibernate that much in our milder conditions. Here you can catch kingfish, bonito, flathead, trevally, bream, morwong, snapper, wrasse and leatherjacket all year round.

From Summer, through the easter holidays to Autumn (December to June) we see some great game fish. We catch albacore and yellowfin tuna, the best time for which is late Autumn. Yellowfin are the most sought after fish, providing a great experience and exceptional feed (if it’s legal, you take what you catch). Yellowfin are spectacular to watch and dart about the waters in their vibrant, silver & yellow colours.

Bonito and striped tuna are also along the coastline and provide plenty of fight. There’s a bigger window for marlin which are in season from Christmas until it’s much colder in June. Striped and black marlin are on offer and provide serious action! While they can be caught closer in,  the bigger gamefish are usually more prominent out at the continental shelf.

Bigger species are more frequent the further out you go, and the Continental Shelf is where it’s at. The Continental Shelf is around 20km offshore from Narooma, providing terrific, easily accessible deep sea fishing all year round. Montague Island is about the half way point to the ‘shelf, where the depth of the water suddenly increases and home to kingfish, marlin and many more species.

Reefs are scattered through this body of water and provide outstanding fishing. One reef in particular is 110 metres below sea level and is an old volcano on the ocean floor, according to CSIRO scientists. 200 metres across, it stands proud 15 metres of the shelf and is around 200 metres in diameter. Reefs such as this, south of Montague Island, are treasure troves in particular for flathead fish. It is not uncommon to catch flathead after flathead for hours on end in the right location.

The volcanic reef creates an ecosystem which fosters the abundance of pelagic fish in all of the waters surrounding Narooma. Scientists believe the volcano crater creates an upward current that distributes nutrients. In turn this supports plankton and all of the fish that feed on it. NPWS have applied some restrictions.

Unfortunately children under the age of 5 are not allowed on the tour (NPWS Restriction).

You may be given the option to wear a face mask at certain times through the tour as a safety precaution (masks will be supplied). We thank you for your understanding and assistance as we navigate these new requirements.